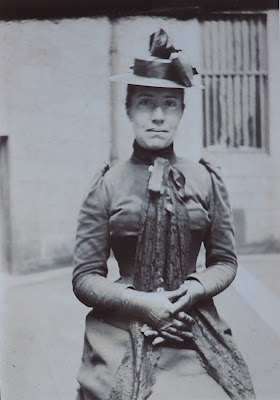 An unwelcome feature of modern life is the telephone cold-call, with the person at the other end of the line often spinning a credible yarn in an attempt to extract personal or bank details from the unsuspecting recipient. Of course, fraud is nothing new, but it does require a particular confidence, skill and sheer brass neck to be able to pull it off in-person, in the way that Margaret Isabella Reid did.
Margaret's nickname was "The Buchan Heiress", a nod to her preferred tactic of pretending to be from a well-to-do or well-connected background as a way of gaining the confidence of those that she intended to defraud.
Evidence from the newspapers of the time suggests that her career of criminal trickery lasted from 1888 through to at least 1904. Many of the contemporary newspaper reports remark on her beauty and stylish dress-sense, being written with a degree of both fascination and respect for her utterly brazen behaviour. For example, The Aberdeen Evening Express of 10th December 1888 compared her to the notorious Victorian con-woman, "Mrs. Gordon Baillie", reporting that,

"An extraordinary series of impudent frauds, displaying courage and cunning of no ordinary kind, was brought to light in Aberdeen Police Court today. The perpetrator is a rather good looking and demure damsel of twenty-four who is known by the name of Margaret Reid, and follows the humble occupation of domestic servant. Her residence is rather indefinite, being entered in the police books as Loch Street, with no number. For one who, from the fact that she never came under the surveillance of the police before, may be said to have been trying her 'prentice hand at the dangerous game of fraud, her modus operandi of victimising innocent people is clever, if not brilliant. Margaret depended wholly on her own resources. As a wholesale prevaricator, one who can manufacture a plausible story at a minute's notice, her talent is of the highest order".

Possibly working on the principle that if you are going to tell a lie then you may as well make it a whopper, Margaret even had the audacity on this occasion to claim that over the past five years she had been a servant to one William Ewart Gladstone, sometime Prime Minister, and had travelled to Inverurie as she was on holiday. However, in the face of the overwhelming evidence against her in court she pleaded guilty and was sentenced to sixty days in prison.

As the following passage from The Aberdeen Journal of 28th November 1896 illustrates, her notoriety spread throughout the country,

"The lady well known as "the Buchan heiress" is reported by the police as having started operations in Edinburgh and the west of Scotland. Her modus operandi is to dress very fashionably, and to take lodgings by pretending that she is about to be employed as a lady's maid in some well-known citizen's house; and after thus getting into the confidence of the landlady, to tell how she has fallen heir to a fortune in Aberdeen. She then suggests that should the landlady at any time require money, all that has to be done is to let her know. In one instance in Edinburgh a landlady said she was very anxious to purchase the house she occupied, and if "the Buchan heiress" would be good enough to advance her £40 or so she would be more than grateful. To do this the "heiress" at once agreed, but, before communicating with the lawyers in Aberdeen, she would like if the landlady would just lend her £5 in order to get a few things before till once the cheque arrived. The landlady in question did not, however, at once agree to this course, and, on consulting her husband, they decided to postpone giving the advance for a few days, and made such inquiries at the house at the house the "heiress" had said she was to be employed as showed that there was no truth in that part of the story. Their suspicion thus being aroused, they communicated with the police, and, being shown a photograph, they at once identified the "heiress". Meanwhile the "heiress" had decamped. She is "wanted" at Coatbridge on similar charges. In various places in Scotland within the last few years she has been convicted of similar offences, and has undergone terms of imprisonment. The police have issued warning to the public against her operations".

Such was the fascination with Margaret Reid that at least two newspapers published engraving-style pictures of her during 1898, a time when she was making a nuisance of herself in the Perth and Dunkeld areas. 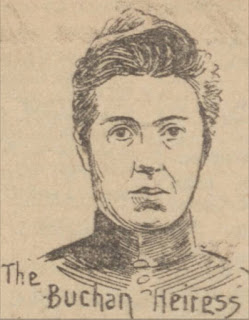 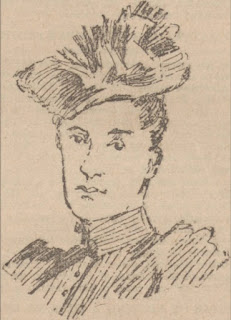 Engraving of Margaret Reid published in the Edinburgh Evening News, 31st January 1898
Publication of such images was rather unusual and undoubtedly reflects the public interest in the character of the Buchan Heiress and what might have driven a woman to commit such audacious crimes. Comparing the likeness of the newspaper images to the photographs at the top and bottom of the page, it would appear that The Dundee Evening Telegraph had access to the better artist.
In 1899, when she was found guilty at Edinburgh Sheriff Court of "victimising a widow" in Musselburgh, The Aberdeen Journal states that Margaret had ten previous convictions. By 1904 she had at least two more from courts in Glasgow and Edinburgh. The reports of these cases provide a little more by way of background information on Margaret: The Aberdeen Journal of 22nd February 1902 recounted that,

"Lucy Gill, better known as Margaret Isabella Reid, the "Buchan heiress", who several years ago carried on a long series of swindles in different towns in the country, appeared yesterday in Justiciary Buildings, Jails Square, Glasgow, charged with several frauds committed in Glasgow and neighbourhood. The accused was quietly dressed in black, and pleaded guilty to all charges. Mr. C.B. Thomson, on her behalf, stated that her father was a man of means and used to be gas inspector at Invergordon. When the accused came from Brighton at the beginning of the year, after a term of imprisonment, she was compelled by sheer necessity to commit the crimes".

Margaret had evidently fallen on hard times in 1902, but come 1904 she is described as being "in service in Hawick as a nurse". 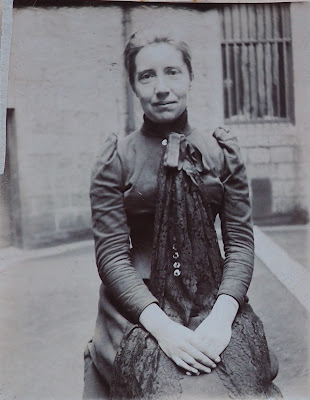 Taken on the 8th January 1880, probably in HM General Prison, Perth, t he photograph of John Wilson that appears in the Register of Returned... 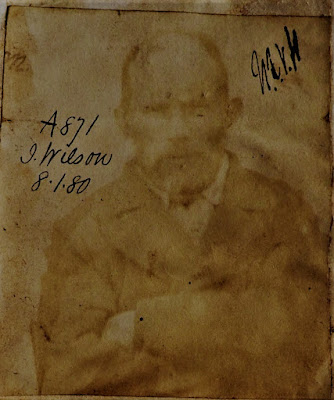