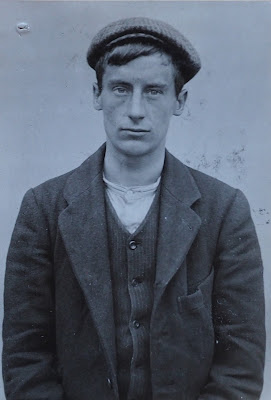 Newspaper reports between 1902 and 1904 suggest that George Anderson was of no fixed abode and was well known to the police in Aberdeen. As with John Cormack, the subject of the previous blog, George's main transgression was the general whiff of shiftiness that emanated from him. As The Aberdeen Daily Journal of Tuesday 25th November 1902 reported,

"George Anderson, labourer, from the police cells, being a reputed thief, adhered to a former plea of not guilty to having, on the 12th, 16th and 21st November, been found in a washing-house in Greyfriars Buildings, Gallowgate, with intent to commit theft. Detective Smith deponed that accused had been convicted on 27th May 1901, of the theft of a hat and jacket, and on 8th March 1902, of articles of underclothing. He had a pedlar's certificate, and went about the street carrying shoelaces. Some men were in the habit of making a pretence of selling shoelaces, while in reality they were looking about for an opportunity of committing theft. Detective Innes corroborated. Constable John Fyvie said that he saw accused in a wash-house in a back passage of an entry in Greyfriars Buildings. When accused saw witness he endeavoured to make his escape by a window. Several witnesses said they had seen accused hanging about the close during the daytime. The magistrate sent Anderson to prison for seven days".

Almost two years later, on 20th September 1904, George appears in the court report of The Aberdeen Daily Journal once again,

"Before Sheriff Begg and a jury, in the Aberdeen Courthouse yesterday, a young man named George Anderson, vagrant, was tried on a charge of having on the 6th August, in the shop at 11 Palmerston Road, Aberdeen, occupied by Alfred Sutton, grocer, pulled open a money drawer or till in the counter of the shop, and put his hand into the till with intent to steal. Accused pleaded not guilty, and Mr. Charles Diack, solicitor, appeared on his behalf.

The first witness called was Mrs. Sutton, who stated that on the date in question she was keeping the shop in the absence of her husband. She was in the back room, and on looking round saw the accused leaning over the counter. He had the till out, and there was 3s 6d in it at the time. She heard the jingling of the money. She ran past him and shut the front door, and accused him of having his hand in the till, but he denied it, saying - "Not me missus; not me". He opened the door and ran out and witness ran after him. She held onto him, and was assisted by Charles Farman, trawl fisherman, until the arrival of the police. The accused had been drinking.

The  Sheriff said unfortunately for accused, there were a great many previous convictions against him...His lordship did not think he could do less than impose a sentence of six months' imprisonment, and accused had better not come back again, because if he went on in his career of crime he would certainly land in the High Court and get a sentence of penal servitude".

Newspaper reports between 1902 and 1904 suggest that George Anderson was of no fixed abode and was well known to the police in Aberdeen. As ...