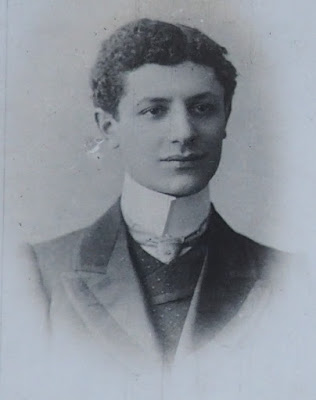 The picture of Ephraim Jacob Feldman is no mugshot, but rather a posed, formal portrait. It shows Ephraim as a dapper, well dressed young man, an impression which is born-out by the report of his trial which appears in The Daily Record and Mail of Saturday 15th April 1905 under the headline "Silk Hatted Prisoner - Young Man Who Traded in Golf Requisites":

"Ephraim Jacob Feldman, a young man of stylish appearance, amazed those who were witnesses of the proceedings yesterday in Glasgow Sheriff Court. When his name was announced he jauntily stepped into the dock, and while the indictment of fraud, with which he was charged, was being read out, he was seen calmly smoothing his silk hat, then adjusting his prince-nez, and generally tending to his dress, with the apparent object of emphasising the perfection of his sartorial outfit.

While Feldman seemed to have the knack of decking himself in the most up-to-date fashion, he was also possessed of the very questionable gift of defrauding unsuspecting shopkeepers...in Glasgow, Perth and Aberdeen. The goods obtained mainly consisted of golf requisites, and included the latest productions in balls, clubs and bags".

The newspaper report goes on to describe how Feldman offered to return the goods to the firms he defrauded, as well as repaying the majority of the outstanding £50 that he owed to other creditors. However, the Sheriff was not impressed and sentenced Ephraim to nine months' imprisonment.

In the album containing Feldman's photograph, a note above the image states that his address was "18, Featherstone Buildings, London", which is located in Shoreditch, towards the East End. This part of London was well known for its large population of Jewish immigrants during the latter part of the nineteenth and into the twentieth century. His unusual name is further evidence that his ancestry derived from this community.

A search of the 1891 census for Shoreditch reveals that Ephraim was one of seven children born to Simon and Frances Feldman. Frances was an East End girl, having been born in Whitechapel, but Simon, an auctioneer and boot manufacturer, had been born in Poland and had probably fled the persecution of Jewish people that swept across that part of Europe after 1880.

The album into which this image is pasted contains a note in pencil directly above the mugshot that reads, " James William Lumsden &q... 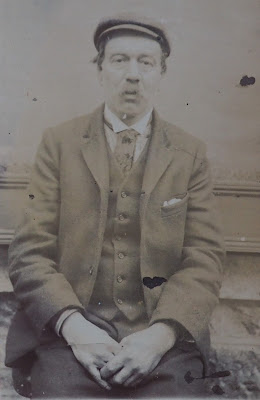